The holiday season is a time of miracles.

Miracle 1: Buying an apartment in Jerusalem

Over the last several years, I have been visiting Israel for extended family holidays and studying at Shiviti and Simhat Shlomo. These two yeshivas are unaccredited Jewish universities for adults who wish to learn Jewish texts, practices and history.

When I visited Jerusalem last April, I began looking for an apartment I could call my own. I saw several but needed help to see how I could afford them. Then I was told about an apartment that was one-third the cost of the previous ones. True, it did not sport a swimming pool or a gym, but it offered a small corner of peace in a residential neighbourhood of Jerusalem close to a street of popular shops and cafes, Emek Refaim, and not far from my favourite cinemas.

Buying the apartment long distance proved to be a nightmare, so I left for Israel the day after the Jewish Fall Holidays on October 19th, 2022. Yet, miraculously, over the next five weeks, I managed to take possession of the apartment and even begin to make it habitable! 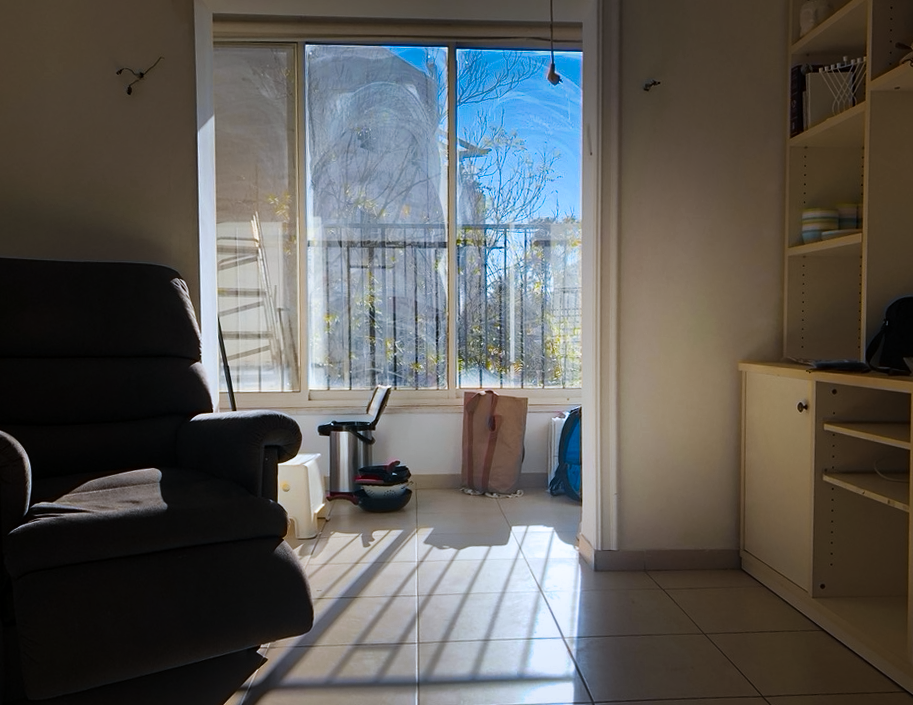 Miracle 2: Walking in the rejuvenated city of Jerusalem

I lived in Jerusalem as a Hebrew University student from 1965 to 1969. Jerusalem was always a city where everyone was used to walking to get wherever they wanted. During this visit, I could walk from one end of Jerusalem to the other even though buses and a local train were all readily accessible.

Before the 1967 six-day Arab-Israeli war, Ben Yehudah Street and Yaffo Streets were the only two central streets in Jerusalem. Jerusalem, in those days, was more like a small village than a city. However, in recent times Ben Yehudah has become one of many central streets that is walking-only, with cafe tables down the centre and shops of every kind on both sides. Below is a picture taken at another pedestrian oasis close to Ben Yehuda-Kikar Hamusika. It is a square equipped with tables, surrounded by restaurants, and boasting the main stage with live music more often than not.

The day after I arrived in Jerusalem, my brother-in-law, Shragai, surprised me by sharing that Barbara Friedman, our friend from Montreal, was having a reunion of Montrealers in her apartment and that I was invited. This was indeed a rare treat to reconnect with old friends, one of whom brought a guitar.

We sang songs, including the children’s Noah’s ark song about the animals entering “two by two.” It was a fitting song since it was the Friday before the Sabbath when we read the portion about the ark that Noah built at G-d’s behest to protect his family and the animals from the rampant immoral behaviour that had infused civilization in those times. 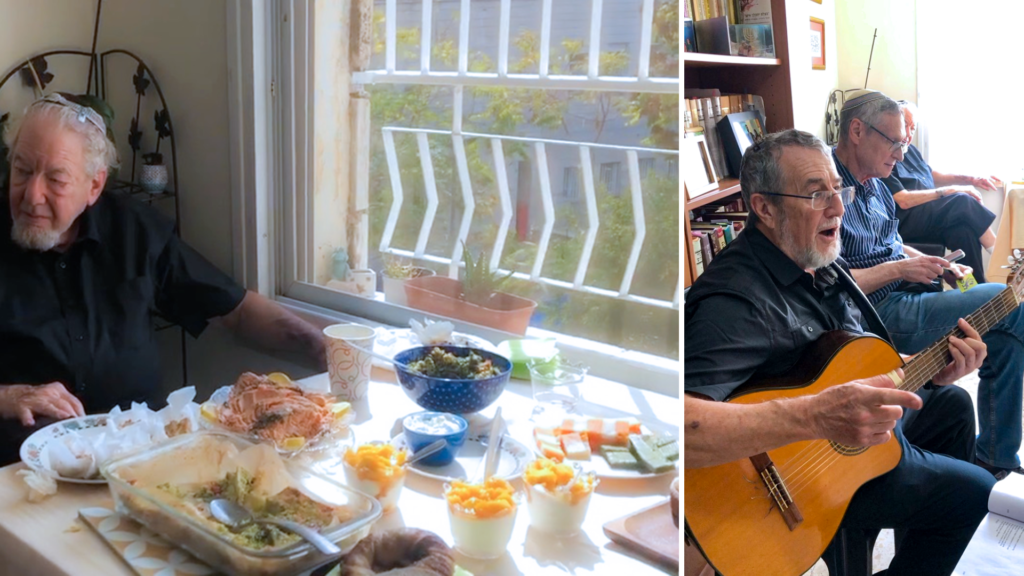 A Montrealers’ reunion in Jerusalem

Miracle 4: Participating and filming the European Cantors Convention in Budapest

On November 1st, I left Israel for Hungary to participate in the European Cantors Convention at the renovated Rumbach Synagogue in the heart of the Jewish section of Budapest, where my dear parents got married on December 25th, 1943.

I hired a local cameraman, Zoltan Banki, to document the convention and my subsequent visit with my cousins, Tehila Umiel, Rachel Kaufman and Effy Fadida, to follow up on our personal histories in Hungary.

At the convention, I met and interviewed many cantors, including Cantor Benny Meisels of Toronto, Cantor Deborah Katcko-Grey, of the US, and Cantor Leah Frey Rabiner of Germany, among others. I also interviewed Harriet Kiss, the director of the Rumbach Synagogue, and the leaders who conceived of and continue to lead the European Cantors Convention, Geraldine Auerbach and Alex Klein.

Every one of them has a fantastic story which I hope to tell in a forthcoming documentary based on the convention. We also participated in exciting panel discussions and unforgettable concerts. 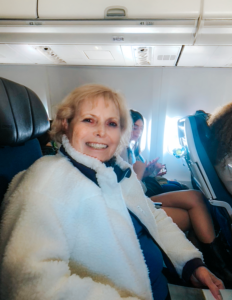 My cousin, Tehila Umiel of Los Angeles, joined me at the ECA and on our subsequent trip of family discovery. 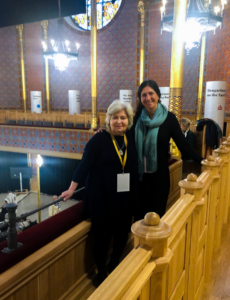 My cousin Rachel Kaufman and I at Rumbach Synagogue

After the convention, Rachel, Tehila, her daughter, Effy Fadida from Israel, and I travelled to Tokay, Szabolcs, Kereztur, and Debrecen, where our Hungarian Jewish families had made their homes. We met with local guides, toured and had kosher meals at Kereztur, the home of the late Hassidic Rebbe Reb Shiele, which has become a place of pilgrimage and hospitality to all. 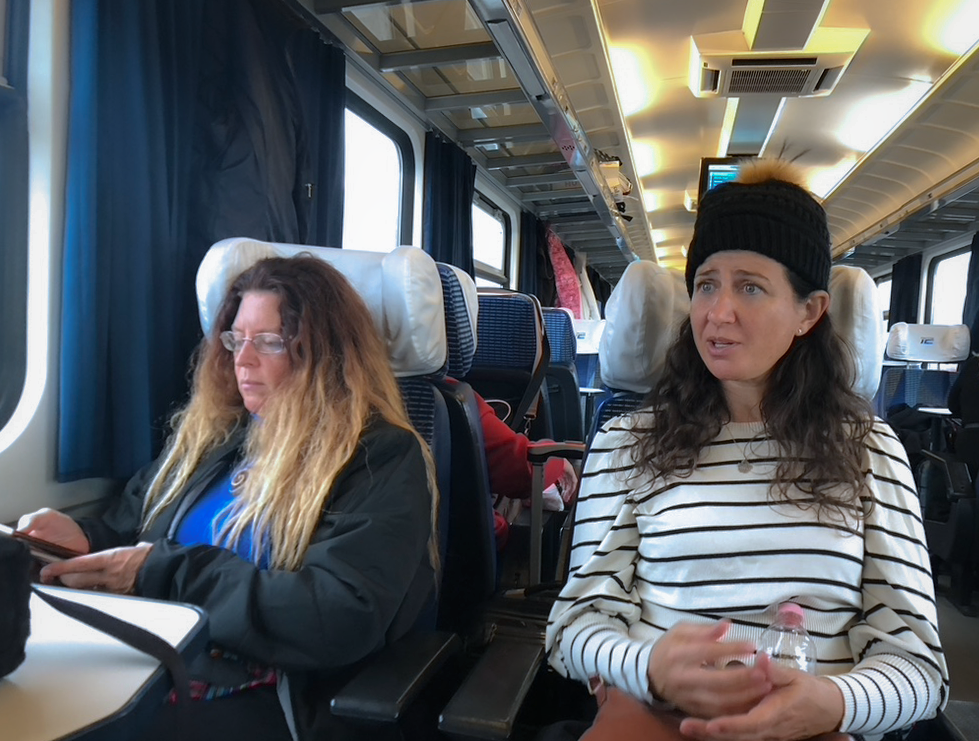 Effy Fadida and Rachel Kaufman on the train to Tokay

We found and visited the Rebbe’s grave at night after supper, as we stayed close by in Tokay. The next day we met and spent time with living relatives who had remained in Debrecen after the devastation of the Shoah.

Below is a write-up of our visit to Debrecen, published in the Hungarian Jewish Debrecen Community Bulletin. I did my best to do an English translation. 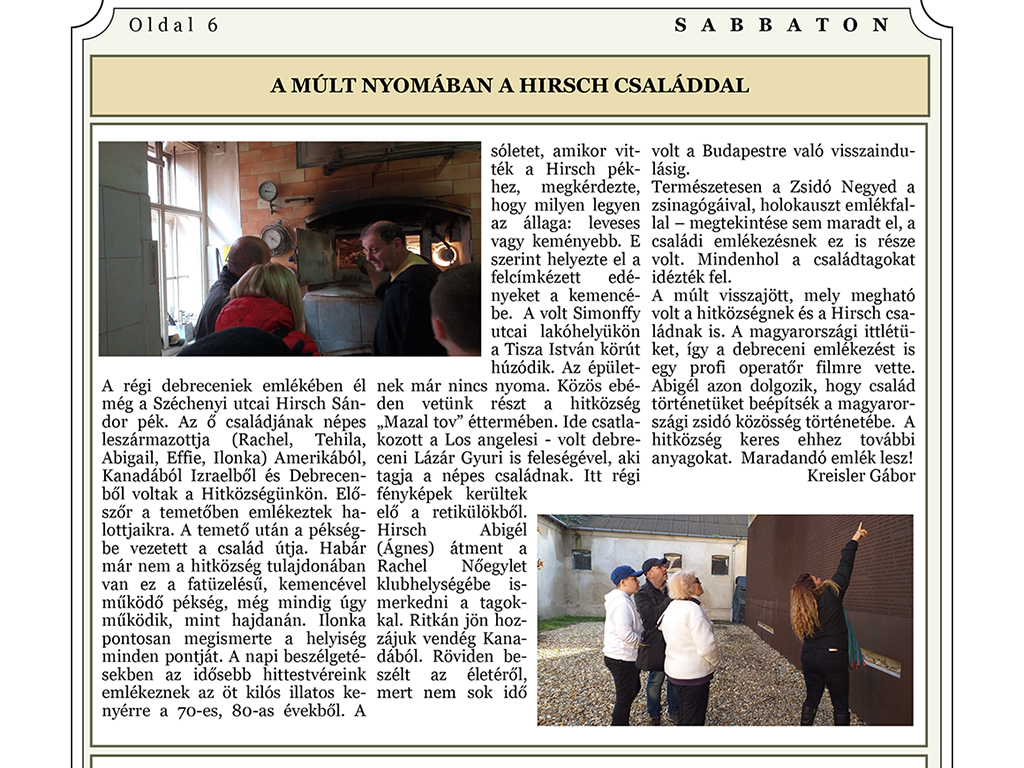 The Széchenyi street bakeshop and baker, Sándor Hirsch (Sanyi Hirsch, my late father’s brother), still live on in the memory of the elders of Debrecen. Descendants of his family, Rachel (Kaufman), Tehila (Umiel), Abigail (Hirsch), and Effy (Fadida) from America, Canada, and Israel, visited our community (last week). First, they remembered their dead and visited the cemetery. Later, the family’s path led to the old wood-burning bakery. Although the religious community no longer owns this bakery, the oven still functions today as it did then. Ilonka Zsabolci (a Debrecen resident and daughter of the late Sandor Hirsch who grew up in one of the adjacent apartments) recalled precisely every point of the bake shop just as our elders can recall their daily conversations and the aroma of the five-kilo loaves of bread that emanated from here during the 70s and 80s.

Ilonka also recalled families bringing their Sabbath cholent to the bake shop on Friday afternoon, and Sandor (Sanyi) would ask them, “Do you want the cholent’s texture to be soupy or thick?” Then, according to their request, he would place the labelled containers in the oven closer or further away from the flame.

Around the corner from the bakeshop at the intersection of István Tisza boulevard and Simony Street #28 used to stand the compound of the late patriarch Samu Hirsch (Shlomo Yisroel, my grandfather, who perished in Auschwitz). There is no longer any trace of that compound. It has been torn down, and a modern apartment building is in place.

After our tour, we shared a joint lunch at the “Mazal Tov” restaurant of the Debrecen religious community. Gyuri Lázár from Los Angeles – formerly from Debrecen – joined us with his wife, Maggie. Gyuri is a member of a family still living in Debrecen. Gyuri left Hungary to study in the US and has lived in Los Angeles ever since. He happened to be visiting Hungary and is related to Rachel Kaufman’s father, Joshua Kaufman, who is also the son of a prewar Debrecen family.

During lunch, we shared memories and photographs.

After lunch, Abigail (Ágnes) Hirsch went over to the club room of the Rachel Women’s Association to get to know the local members. Unfortunately, they rarely have guests from Canada. But unfortunately, the visit was short because there was not much time before their train returned to Budapest.

Of course, the Jewish Quarter, with its synagogues and Holocaust Memorial Wall, was not to be missed. Family members were recalled everywhere.

Tehila and Effi, pictured here, could find Tehila’s father’s name – Bela Hirsch – carved into the memorial wall, which lists all of the Jews from Debrecen who was deported and died during this time, never to return.

The past came back and was moving for the religious community and the Hirsch family. Their stay in Hungary, including their commemoration in Debrecen, was filmed by a professional cameraman (Banki Zoltan). Abigail is working to integrate their family history into the history of the Jewish community in Hungary. The religious community is looking for additional materials for this. It will be a lasting reminder of the past and the present.

Written by Gabor Kreisler (who was also our guide for the whole day, delegated by the Debrecen Jewish community)

When I arrived back in Montreal, I discovered that my Christmas cactus, transplanted by a plant whisperer in my neighbourhood, is flowering again! 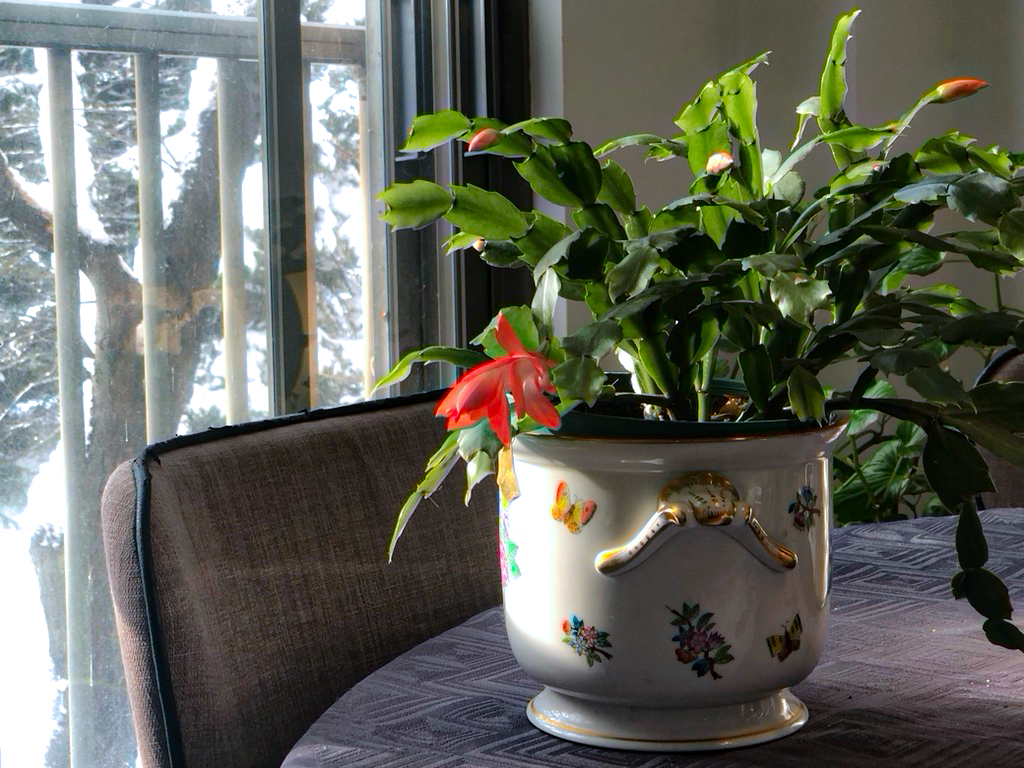 Now, In the darkest time of the year, we are reminded that sometimes less is more. Small lights can light up large spaces. And the few can overcome the many as in the time of the Maccabbees!

May we all be blessed with peace and joy in our homes now and in the years to come.

Happy Holy Days to all and everywhere

Back in Montreal, wearing my holiday sweater and attending the Chanukah sing-along concert “Latkes and Lyrics” at the Segal Centre.

3 thoughts on “A Season of Miracles and Light”