“Thou shalt honour thy father and thy mother!” ~ The Fifth Commandment

Our first teachers are always our parents.

My teacher, Yehudis Golshevsky, recently gave a talk on this commandment on the occasion of the first anniversary – the yahrtzeit – of her father’s passing. It is traditional mourning practice among Jews to get together with family and friends to remember and recall parents every year on the anniversary of their passing to the next world, to share reminiscences about them along with words of the Torah.

The Rabbis of the Talmud claim that the fifth commandment is difficult to fulfill. They say this is because we all have “complicated relationships” with biological parents. And these “complications” may take a lifetime and even beyond to process.

If you want to understand this, you have only to read this article about Andre Taylor, the former pimp who was recently named Seattle’s Street Czar by Mayor Jenny Durkan. Taylor does not shy away from his past and has openly spoken about it most of his life.

“God brought me from the gutter; my mother was a prostitute; my dad was a pimp. I was born from the womb of a prostitute by the seed of a pimp. But the context is this is my mother and father, and regardless of how society has seen them, there was no way I could see them in that light… they hugged me, they loved me, and they cared for me and even though society says this is the scum of the earth this was not my reality.”

Rebbetzin Golshevsky shares that the sages of the Talmud identify this mitzvah – kibbud av v’eim – as being the most difficult to fulfill properly: After all, we are all born, without our consent, into a specific genetic and historical process. It is common to wish that we had”different parents” or been born into a different time.
In a later halachic work, the Chayei Adam explains that honouring one’s parents is so difficult because the root of it is in our minds and our attitudes, which is very deep work. Ibn Ezra, a medieval scholar regarding the same issue, points out that our feelings towards our parents can continue even into adulthood, to be very powerful, even obsessive, and this can easily obscure the debt we nevertheless owe to our biological parents: If they had not given birth to us, we would not be here. It takes a long time for most of us to achieve this insight and pay them the respect and care they deserve.

Rebbetzin Golshevsky shares her and her father’s evolving process in the video below with her family and students. She describes how she and her father underwent enormous changes as they evolved together. Her talk begins at 7:14 minutes.

Rebbetzin Golshevsky’s father requested that certain songs be played at his yahrtzeit as he was dying. Little did he know that his yahrtzeit would take place on Zoom amid a pandemic and that his dear friend Michael would be able to play his favourite songs on the piano from his home in Jerusalem – Autumn Leaves by Gershwin and You don’t know Me by Ray Charles. The musical part begins at 45:14 min.

In this pandemic year, my family commemorated on zoom the yahrtzeits of my dear mother, Esther Edith (Z’l) and my dear father, Eliezer Leslie (Z’l), who are both pictured below. It’s a wonderful way to bring them back to life in their full glory for all of us here and now, especially for the next generation who get a glimpse of those who came before. As my dear Mother would look over her family gathered around the Passover seder table before her passing on, at close to ninety-nine years of age, finally giving herself the acknowledgement she deserved, she was fond of saying with a laugh, “If not for me, none of you would be here!”. 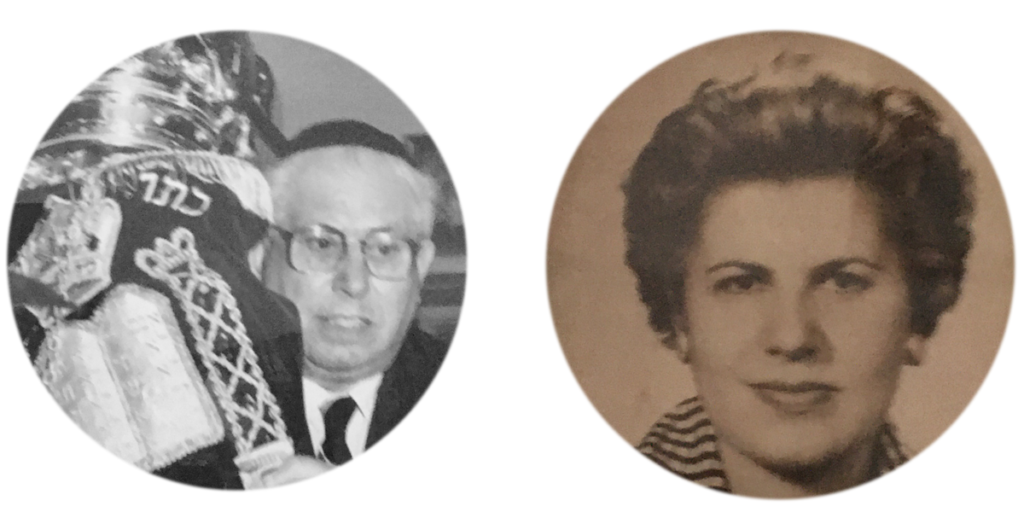