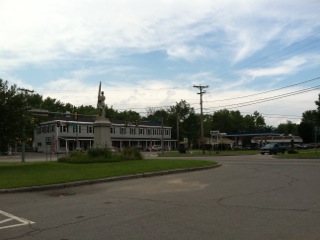 Joel Yan, a Jewish lay spiritual leader and myself, were on our way home from a week-long retreat of classes and singing at the biannual Aleph Kallah at Franklin Pierce College.

It was Sunday, and both our families were expecting us back that day. No sooner had the car stalled, people started stopping, asking if we needed any help, offering to move the vehicle off the road, diagnosing the problem, and even shelter us if we needed it.

Katherine Stewart (originally from Ontario) stopped and gave Joel her phone number urging him to call if needed.

A man in a pickup truck stopped and helped diagnose the problem saying the same thing had happened to him with his Toyota Camry – the cable broke disabling the automatic transmission and prompted the car to stop in its tracks.

Bruce, who lived across the street, drove up in his pickup truck with his wife saying we should knock on his door if we needed a drink or somewhere to relax.

Another person drove up in his jeep with a small American flag. 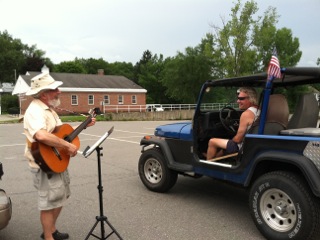 By this time, Joel took out his music stand and guitar and played up a storm in the searing heat.

Norm then drove up on his bike, pulling a broken air conditioner and hung out with us for a while. 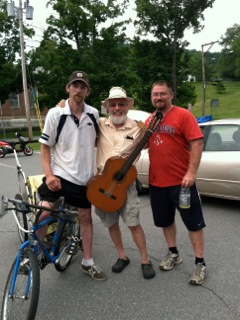 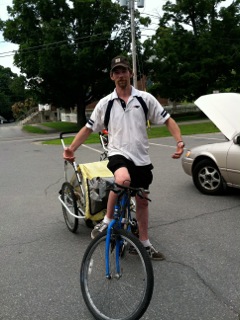 The attendant at Mikes’Mikes’ Market at the Mobil gas station at the corner allowed me to charge my phone, and use the restroom.

Even the AAA truck driver who arrived after a two-hour wait was exceptionally kind, explaining that we can safely drive the car once it was in gear, and a tow truck to the garage was not needed.

But our very special mentsch/angel was Ralph Scott Britton. He had been directly behind us on a motorbike when the car broke down. First, he helped diagnose the problem and push the car off the road. Then he stayed with us, assisting total strangers for over 3.5 hours. He waited with us for the AAA to come, advising us all along, and then escorted us to Keene behind his motorbike while looking for a place to stay and a solution to the car problem. In the end, Scott trained Joel on how to switch the gears manually under the hood and then watched and tested him, making sure he could do it himself. Then, only when he was sure we were safe, he sent us on our way. He refused any compensation for all his help and suggesting instead that we pass his good deeds along to others who were in need. 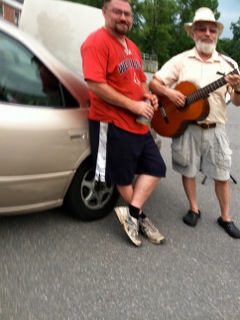 And thanks to Scott and all the other kind people we met, we made it safely with the broken cable, first to our friends in Vermont who put us up for the night, and the next day to Montreal and Ottawa to our respective families.

We feel that sharing these stories is a way of passing on the power of goodwill that we experienced in the tiny hamlet of Winchester. Thank you to all of you. You are a community that cares.

“Mentsch,” a Yiddish word that means “a person of integrity and honour.”